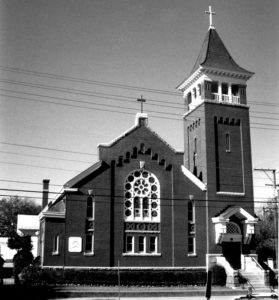 When you read the history of Sacred Heart Catholic Church on Perry Street in Manchester, South Richmond you get the impression that it was built on dreams.  It was.  This brief history hopes to present the events and persons that constitute the conception, birth and growth of the church from its being a bishop’s dream to the realization and continuous development of that dream to the present.  (from the parish’s centennial book, 2001)

In 1876 Bishop James Gibbons, fourth bishop of Richmond, and later first Cardinal of Baltimore dreamed of a parish for South Richmond Catholics and so purchased a tract of land at 14th and Perry Sts. In Manchester.  That same year a Catholic Sunday school opened nearby in a private home on Bainbridge St.  It was not until 1901 that Sacred Heart Church was built and dedicated.  It was built at the cost of $14,608.91 through the generosity of Mrs. Thomas Fortune Ryan, who along with her husband also paid for the construction of Sacred Heart Cathedral in the Fan District.  Two years later the current rectory was built next to the church that had been the site of the “Manchester Catholic School” building for a couple of years.  That building was moved to a spot behind the church, later called the White House and more recently, The Hall of Nations.

Sacred Heart School closed in 1987 due to declining enrollment.  In 1990 Jesuits from the Maryland Province of the Society of Jesus took responsibility for the parish and opened Sacred Heart Center in the former school building.  Sacred Heart Center was conceived to be a neighborhood resource to empower residents of the Bainbridge-Blackwell area and began innovative programs among area residents, from child care to youth activities and adult education.

Beginning in 1992 a weekly Mass in Spanish was held at Sacred Heart under the auspices of the “Centro Católico Guadalupe” (the Guadalupe Catholic Center).  In 1999 members of this group became members of Sacred Heart and St. Augustine Parishes.  Our Spanish speaking parishioners come predominantly from Mexico, Guatemala, El Salvador and the Caribbean, along with others from the rest of the Spanish speaking world.  Asians and English and French speaking Africans also call Sacred Heart home.  Growth in our church community has resulted in a parish of more than 1000 families.

In 2011 Sacred Heart Center refocused its outreach to the region’s Latino communities.  In September 2016 Sacred Heart Church completed the purchases of properties on the block where the church is located, so that the church now owns the entire block as well as about half the block across Perry Street.  The parish looks forward to expanding facilities to serve our community better.  Sacred Heart Church, born of a dream to give greater access to the Sacraments for Catholics living south of the James continues to do so today and dreams of being “sacrament” –a channel of God’s grace—to all we serve.

For a more detailed history of the parish, please see Sacred Heart Church 1901-2001:  A Catholic Tradition South of the James, our parish centennial book.